Incredible work. Really happy to see this.
Hoping you are able to power it up soon! Two hard drives should be enough to draw some current. Let’s see what happens to the +12V rail now. We set the multimeter to manually be on V, not autodetect as that could mess with the numbers as the meter can’t work out the range quick enough before the voltage changes.

Hmmm, alternating between 4.1V and 1.8V. The +5V rail is not working either. So why did it work yesterday? Was it the lack of a load on the rails perhaps? Does the +12V rail being connected cause a short somewhere? Is there an actually an issue with ground being short? Someone much wiser than me advised that this is what a crowbar circuit looks like when it is activated.

A crowbar circuit is an electrical circuit used for preventing an overvoltage or surge condition of a power supply unit from damaging the circuits attached to the power supply. It operates by putting a short circuit or low resistance path across the voltage output (Vo), like dropping a crowbar across the output terminals of the power supply.

I really do not want to pull that power supply apart again, unless we have some sort of guarantee of success with the main board powering on. As we’re running out of days and I’m running out of allocated money for this project, I’m going to try integrating a modern (<20 years old) power supply that I found when cleaning up the garage.

All I need is an adapter from ATX to AT to arrive from overseas. This was ordered as a potential backup plan mid-October - it could turn up any day now. Cross your fingers for me! 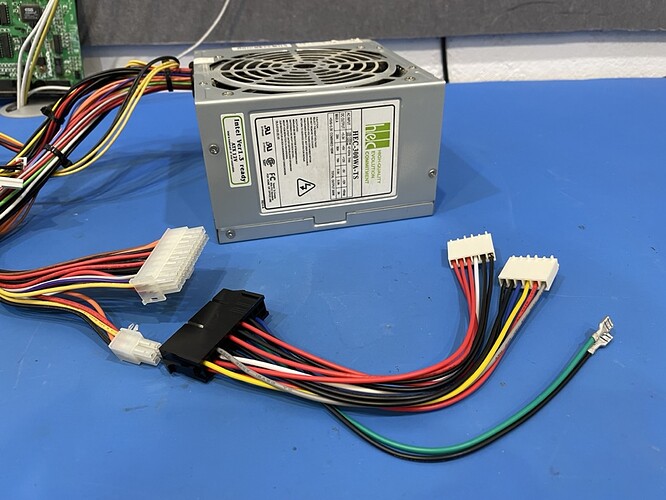 It arrived, unbelievable. ETA was next Tuesday but for whatever reason it actually turned up early. You can see the ATX power supply in this photo too with the voltages it provides. Note the inclusion of the -5V and -12V rails. 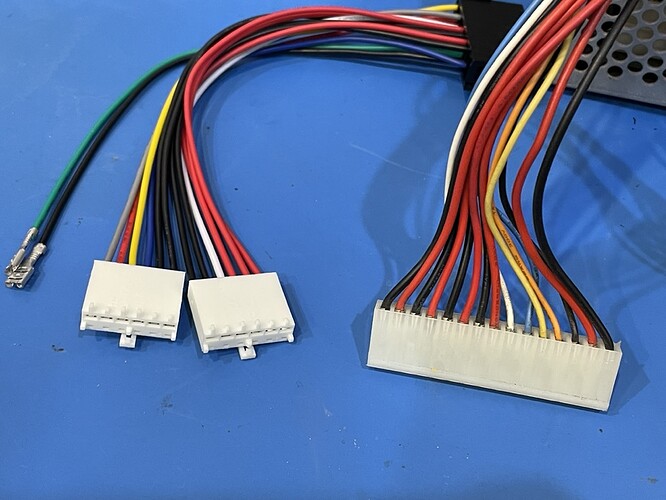 First thing is to get the standard AT power supply connector to rewire to match this bastardised plug Data General thought would be fun to use. 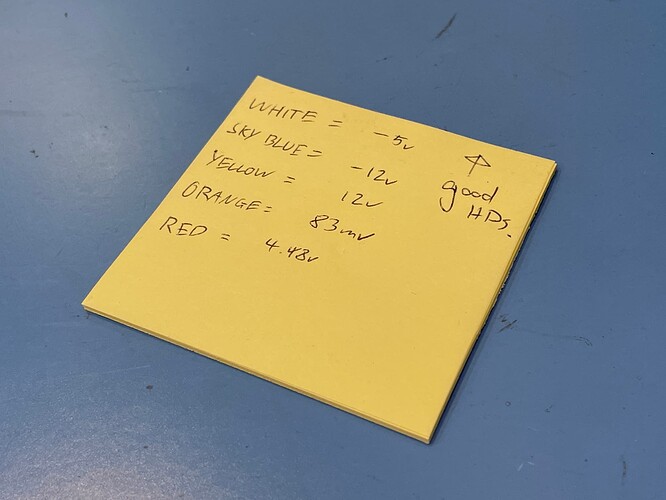 We just need to match the colours as the Dasher 386 power supply is pretty standard in that respect. The colours mean what they mean. +5V red, +12V yellow, -5V “sky blue”, -12V white, GND is black, etc, etc. The good news is the pins look to be the same in each connector… 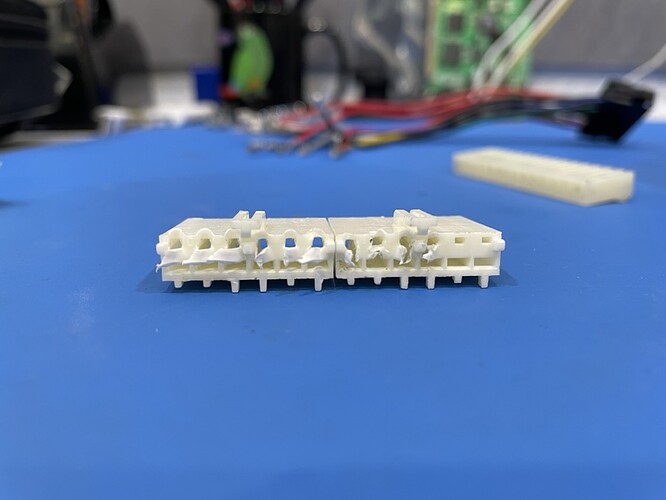 And the bad news is that the AT connectors had to be irreversibly destroyed to remove the pins. There’s no recovering from that. 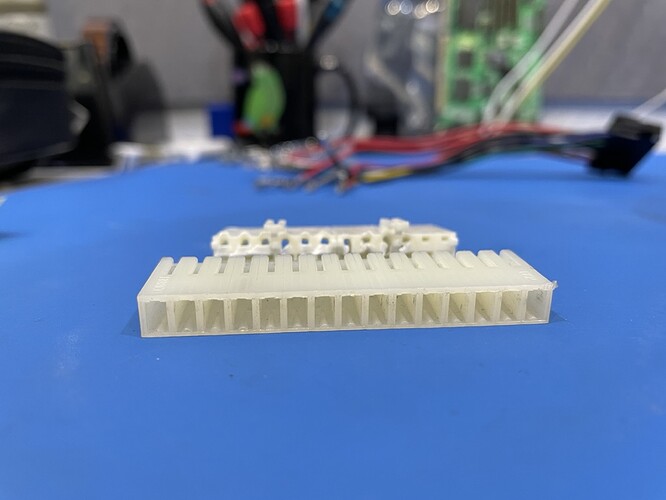 The Dasher PSU socket was much nicer to remove cables from and resulted in no damage and took 1/10th the time to remove the cables. They just don’t make them like they used to! The missing pins were found to be common with each other. The missing +5V and GND were already shared with others so that’s no issue. Grey is our “Power Good” signal (instead of orange on the original PSU). Zooming out we see that we also have a green and black wire. We need to tape these together to power on the machine. Ordinarily they would be on a switch, which I am not digging out of the power supply just to test. We’ll try something a little unconventional. 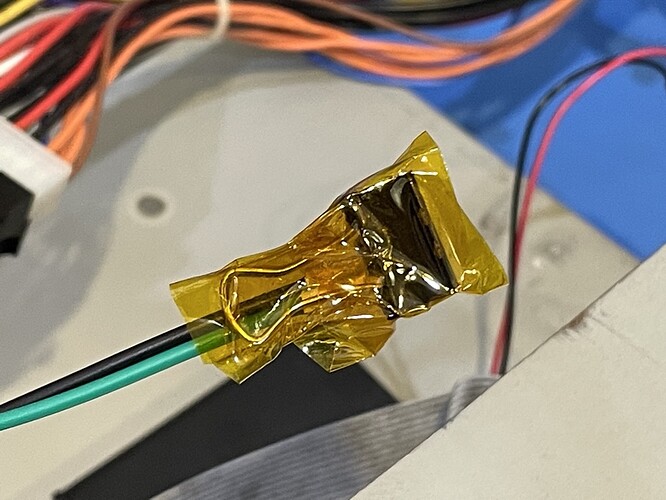 A bulldog clip which is also know as:

A binder clip, less commonly known as a paper clamp or foldover clip or bobby clip or clasp, is a simple device for binding sheets of paper together. It leaves the paper intact and can be removed quickly and easily, unlike the staple.

I couldn’t use staples so a bulldog clip wrapped with Kapton tape to prevent any damage to surrounding people or components. Initial power on showed all power rails in good shape. However, our symptoms were the same as before starting the project. We tried changing jumpers around, RAM configurations, reseating ROMs in sockets but it all came down to no video and really, as far as I could tell - no POST with either the onboard video chip, or three other video cards we had on hand for testing, in any one of the ISA slots. 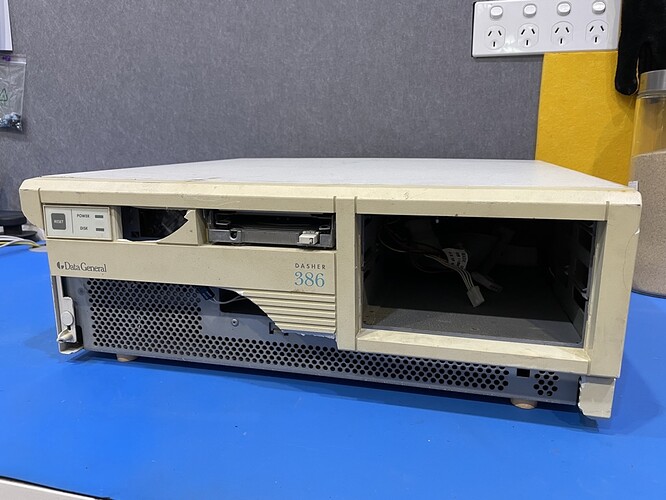 So where does this leave us and what are the next steps?

Well, from what we have seen it looks like we have an issue with the mainboard and now the original power supply. Unfortunately, I don’t have the equipment or skill to diagnose and repair either of these at this point. I’ve over budget and out of time, I do wish that RetroChallenge was two months long. One month doesn’t seem like enough if you hit any snags - which I certainly have. 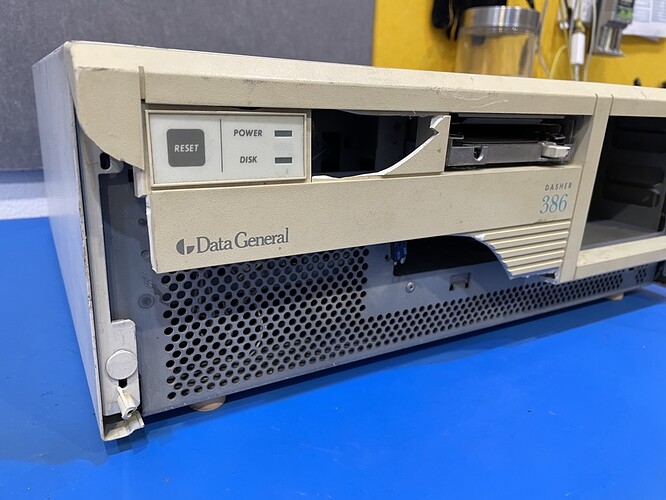 I’ve reverted the power supply connector back and put the machine as much into it’s original configuration as when I found it - with a warning on the power supply AC inlet to not connect to power. 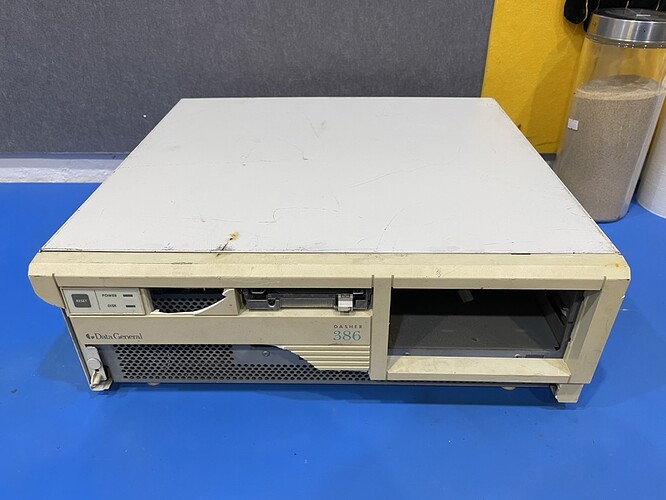 This has certainly been a a learning experience. I now know a lot more about which capacitors are best to replace in power supply circuits. I also know a fair chunk more about how a 386 should work. That’s not to say I’m a little disappointed that it didn’t work out, but it’s important to know when to stop. We’re now at that point. Next up is a little more information on the history of Data General from this fantastic archive.

Their FOCUS_1989-06-Jun edition reveals this tidbit:

And it goes on to say…

The Dasher 386-25 is faster and more powerful than the entry-level Dasher/386, providing minicomputer performance and functionality for the price of a personal computer. 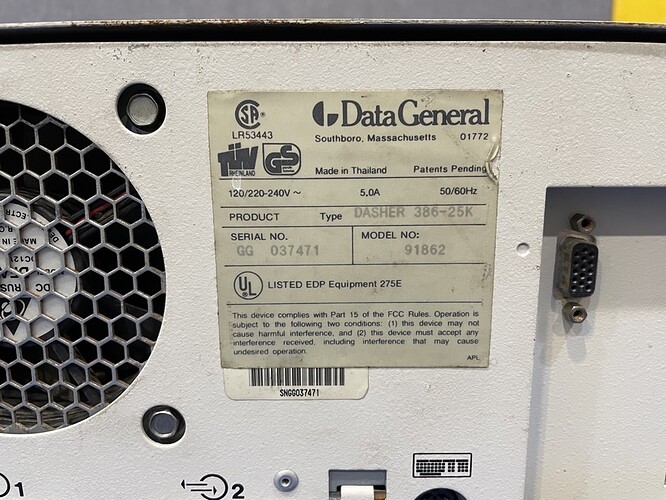 Which means that this machine may have been a more advanced version of the Dasher/386 given the model is a DASHER 386-25K. I’ll mirror the ‘FOCUS’ magazine collection for some light reading in the future on my web server at http://retrojunkie.net/files/. Any one who wants to is welcome to add any information they can about the Data General Dasher 386 into this thread.

Thank you to everyone who has been reading along, I hope you enjoyed and learnt something along the way, I know I did! … looking for a design in a relatively small package. Relative to what? A mini-bus? 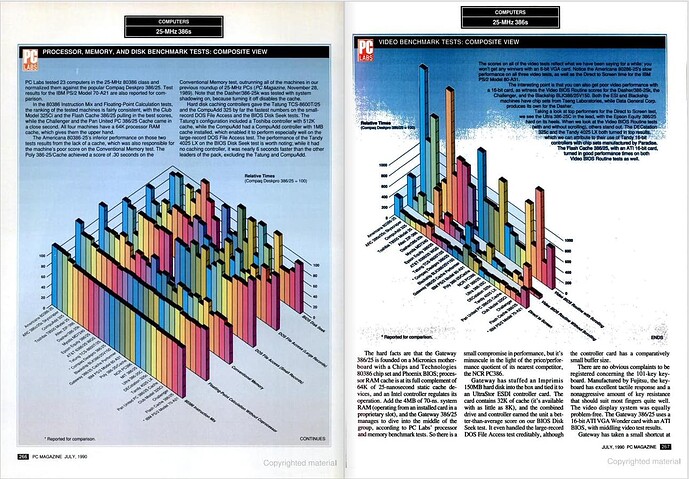 Look at that performance though, the Data General takes on all the big names and sends that orange bar soaring. 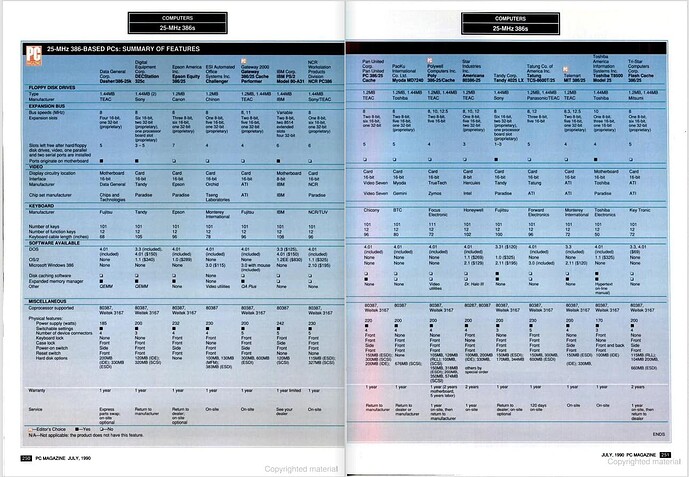 There’s some interesting specs. We have 200MB IDE and 330MB ESDI (Maxtor) hard drive, 185-watt power supply - now we know. Video chip was from Chips and Technologies and manufactured by Data General. The keyboard was a Fujitsu. 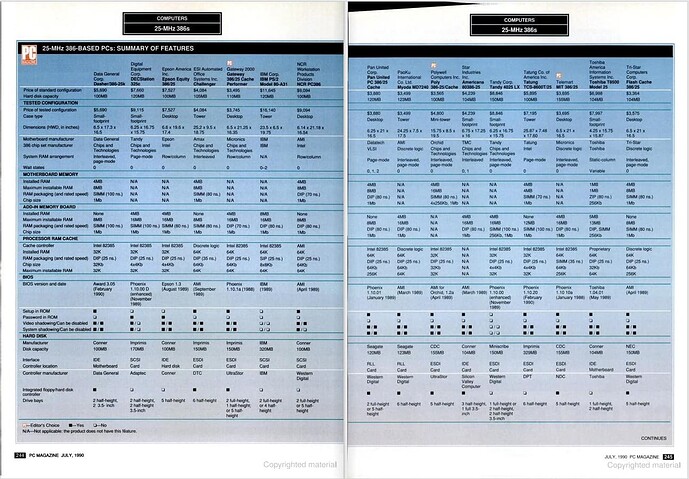 Default included hard disk was a Conner 100MB IDE. The case type was “small-footprint”. Maximum onboard RAM was 8MB (8x1MB SIMMs, 100ns). Not forgetting there was that proprietary RAM card that could double the RAM with an additional 8MB, with the same configuration as the mainboard by the looks. Quite interesting.

Those dark marks on the traces are likely corrosion of the underlying traces below the solder mask. Eventually you may have to bridge these with a jumper wire or sometimes scraping off the mask you can add a bit of solder to rebuild the track, although this normally requires scraping it back to bare copper first.

Rubycon, great choice and my favorite brand of cap.

I’ve also fallen for that trap in the past. Now I know you normally need an adequate load on the +5V rail so that the switching pulses are wide enough to generate voltage on the +12V rail and any others too.
It’s possible that before you replaced the caps that your +5V rail was leaking enough that it was creating ‘THE’ load and that’s why you saw +12V.

When I have some more free time I may go poking around all the various traces now that I can use a known working power supply to test. Those traces are tiny though, I wish I had one of those desk lamp magnifiers to make the work a bit easier.

Interesting theory, it would explain where some of the +5V rail was going. It’s tricky to leave it be because it’s so much fun to play with but such a time vampire!