RetroChallenge 2022/10 - Booting an Apple IIe the long way around

I will be attempting to boot an Apple IIe from an AppleShare file server. The twist is I will be using an Apple IIe Card installed in a 68K Macintosh to boot via LocalTalk to AppleShare Server 3.03 running on an SE/30. I will also be trying to do it all with original hardware and software. I have a stretch goal of trying to do this via firstly LocalTalk and then Ethernet.

Awesome! Look forward to this progress as I’d love to try myself!

I thought this was going to be a lot easier than it was. My very first Mac back in the day was a Macintosh LC with IIe Card (as I was upgrading from a IIgs) so I was familiar with how it worked. The biggest issues all turned out to be old hardware related.

I powered up the LC475 and got a reassuring startup chime. The logicboard and PSU were professional recapped 2 years ago so I wasn’t anticipating any problems there. After the RAM check I got the (all too familiar these days) flashing question mark. The hard drive was dead, no problem, I had plenty of old SCSI drives. After about the 10th dead/dying/screeching/howling hard drive I decided to break my own rules and go for a more modern solid state solution. I have a large variety of these SCSI to SD/CF card solutions such as the Block Devices - AztecMonster, SCSI2SD and Volume Devices - BlueSCSI and RaSCSI. I won’t go into details on these solutions here but I decided on the BlueSCSI for the LC as it was the simples to setup. Once I got a blank image on the BlueSCSI and I could get it to appear on the SCSI bus I was ready to install software. I went for 7.5.5 as it is the most stable on the LC475 while still supporting the Apple IIe Card software. I made floppy disk images with another Mac in preparation for the software install.

This was where I hit the next old hardware snag. I powered on the LC475 and inserted the Install 1 disk only to have the drive make weird noises and eject the floppy. I tried multiple floppy disks with the same result. Finding an internal HD floppy drive that worked was more of a challenge than I expected. I didn’t have any spare internal drives but I did have a few working external 800kB drives but only two Apple SuperDrives so was reluctant to open them up for the internal HD drives they contain. Before I sacrificed these precious drives I decided to do a bit of maintenance on the faulty internal drive. After a bit of cleaning with Iso Propyl Alcohol and applying some lithium grease the drive finally worked.

After all the hardware failures I was finally able to install System 7.5.5 (Note: you have to install 7.5.3 and then update to 7.5.5) and the IIe card software, partitioned the card with one HFS (Mac SD) and two ProDOS volumes (PDOS1, PDOS2), installed ProDOS 2.4.2 on them and I was ready to go. For details on how to partition the drive see Jays Graham’s KansasFest 2021 presentation Apple IIe Card Partitioning, it was an invaluable guide to something I genuinely thought I knew how to do. I now had the Apple IIe Card running a IIe inside my Macintosh LC475, now to get the AppleShare Server running… 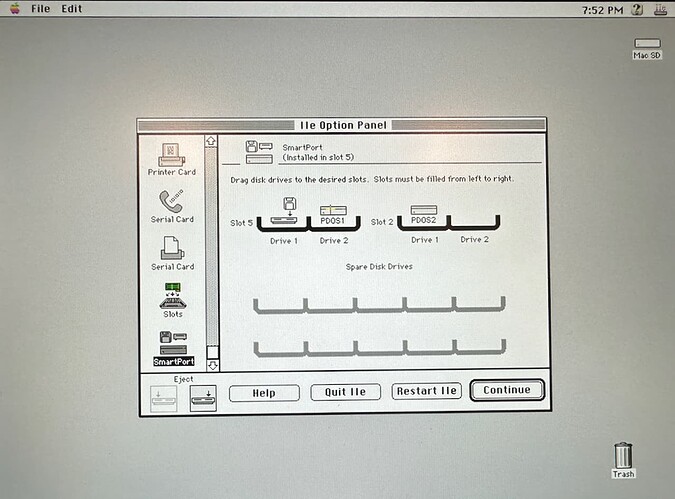 So the AppleShare server, did this offer file storage or network applications for the IIe with a workstation card?

RetroChallenge 2022/10 – Getting AppleShare up and running

Now I had the IIe card working, it was time to tackle the server. I was going to cheat a little and just connect to my A2SERVER running on my Raspberry Pi but I felt that wasn’t in the spirit of my original Challenge. The other reason was my Cayman Gatorbox PSU decided to pack it in. Therefore I was stuck with a LocalTalk to LocalTalk setup which was pretty much the way it was back in the day anyway.

For the server I chose an SE/30 with 8MB of RAM and a 200MB hard drive. As with the LC475 the logicboard, analogue board and PSU were all professionally recapped 2 years ago so I had my fingers crossed I wouldn’t run into similar issues to the LC475. The good news was the SE/30 booted up from its internal hard drive with no issues and the floppy drive was working fine. I had a BlueSCSI connected externally with the images for System 7.1 and AppleShare 3.0.3 so I could do a fresh install of all software on the server. I could have made floppy discs of all the images for an authentic experience but I was aware that the RetroChallenge is only for the month of October so I needed to get a hurry along.

Once the software was installed it was just a matter of launching the AppleShare Server software, sharing a volume and configuring a guest user. I was amazed that I remembered how to configure the AppleShare Server as I hadn’t done that in at least 25 years. As a test I connected the LC475 to the SE/30 with PhoneNet connectors and the server appeared in the Chooser of the LC475. I was able to mount a volume on the LC475. It was time to try and mount a volume on the IIe Card. 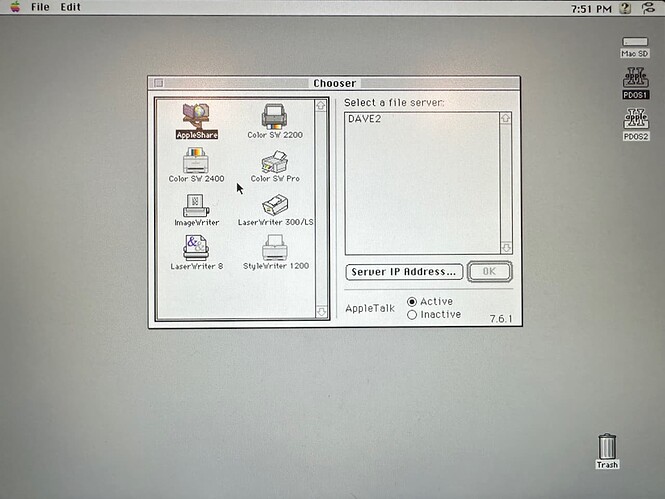 Both. It will mount a ProDOS volume on the IIe. AppleShare 3.03 will also allow a IIe with a Workstation card or a IIgs to boot directly from the server with no drive or media on the Apple II.

RetroChallenge 2022/10 – Connecting the IIe Card to the server

As with anything like this it was easy once you knew what to do. The first thing to do was configure the IIe Card. I needed to install the virtual Apple IIe Workstation Card first. This was simply a drag and drop from the Spare Cards section into a slot in the virtual IIe. I installed it in Slot 1 as that was free, plus I remember that the few times I used Apple IIe Workstation Cards back in the day they were always installed in Slot 1. After making a copy of the Apple Workstation Card software on a 3.5" disc, setting the IIe to boot from Slot 5 and setting Slot 5, Drive 1 to the internal floppy drive in the SmartPort settings it was time to boot the IIe and see if it can see the server. 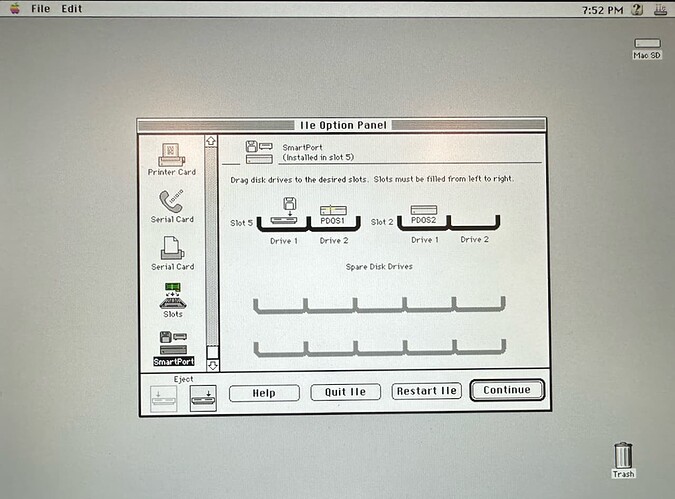 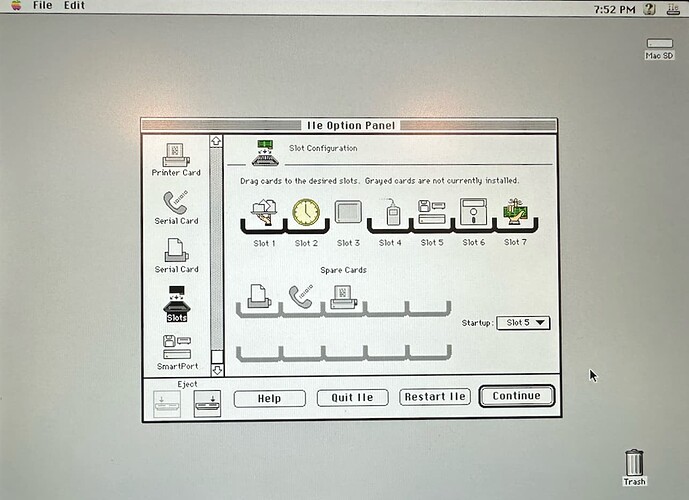 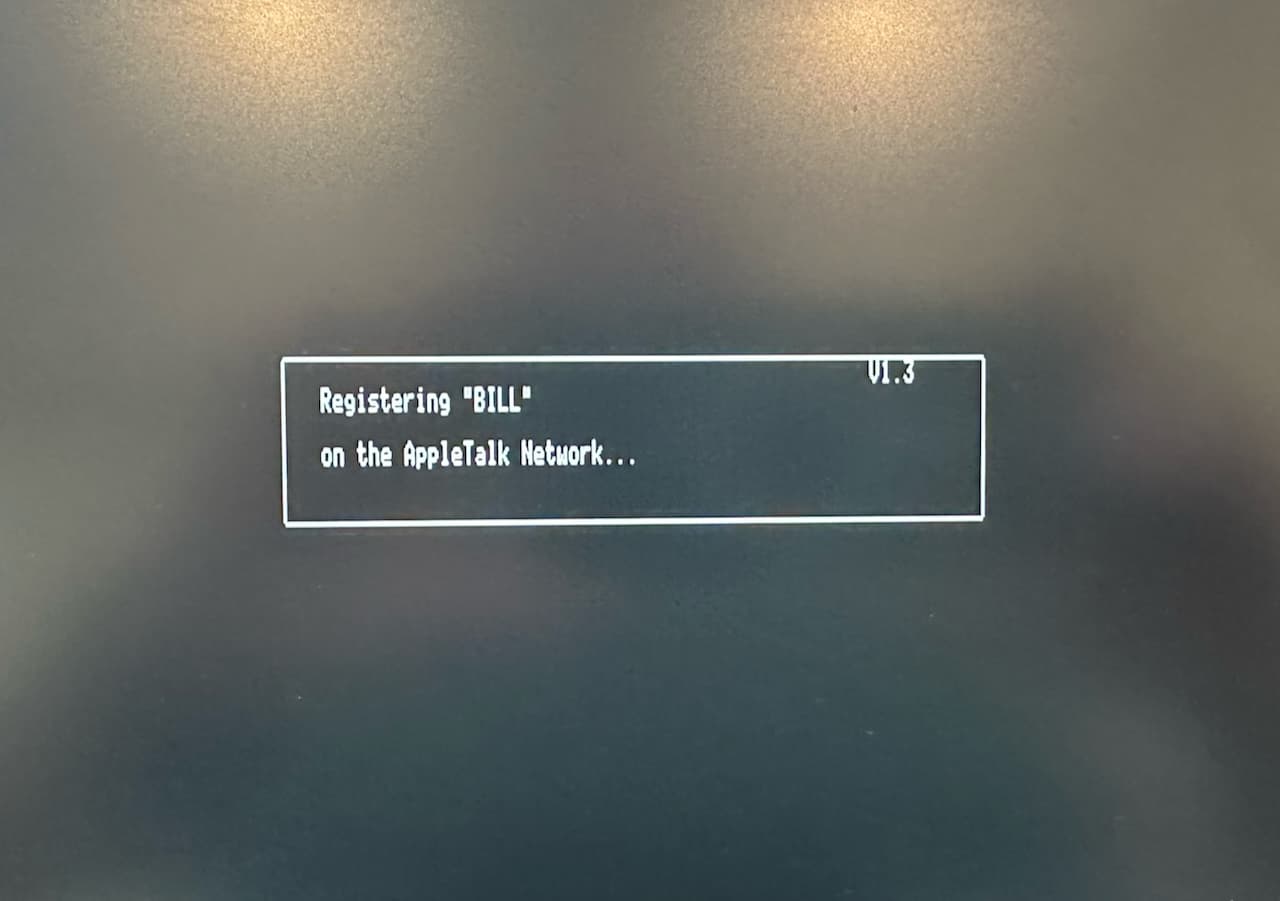 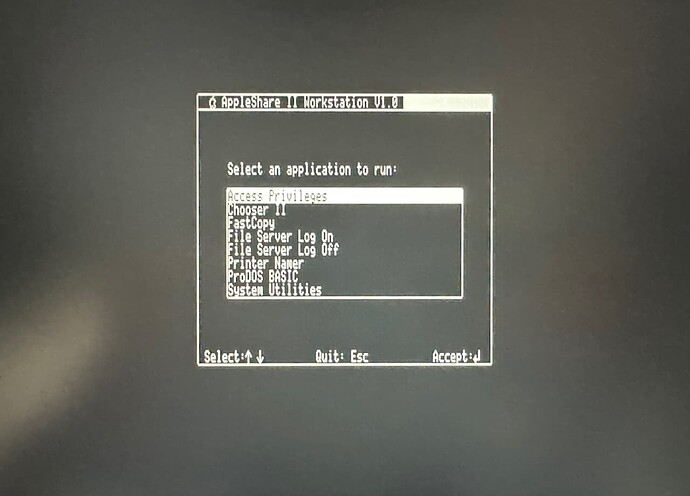 After choosing the “File Server Log On” option the IIe went looking for AFP servers on the network and found my DAVE2 server. I then selected the server and was presented the Username and Password dialog box. During the log on process I found an interesting little bug. If the username (in this case “BILL”) is entered in lowercase the IIe Card will crash into the monitor. Once the username and password are verified a dialog box appears with the available volumes to mount. 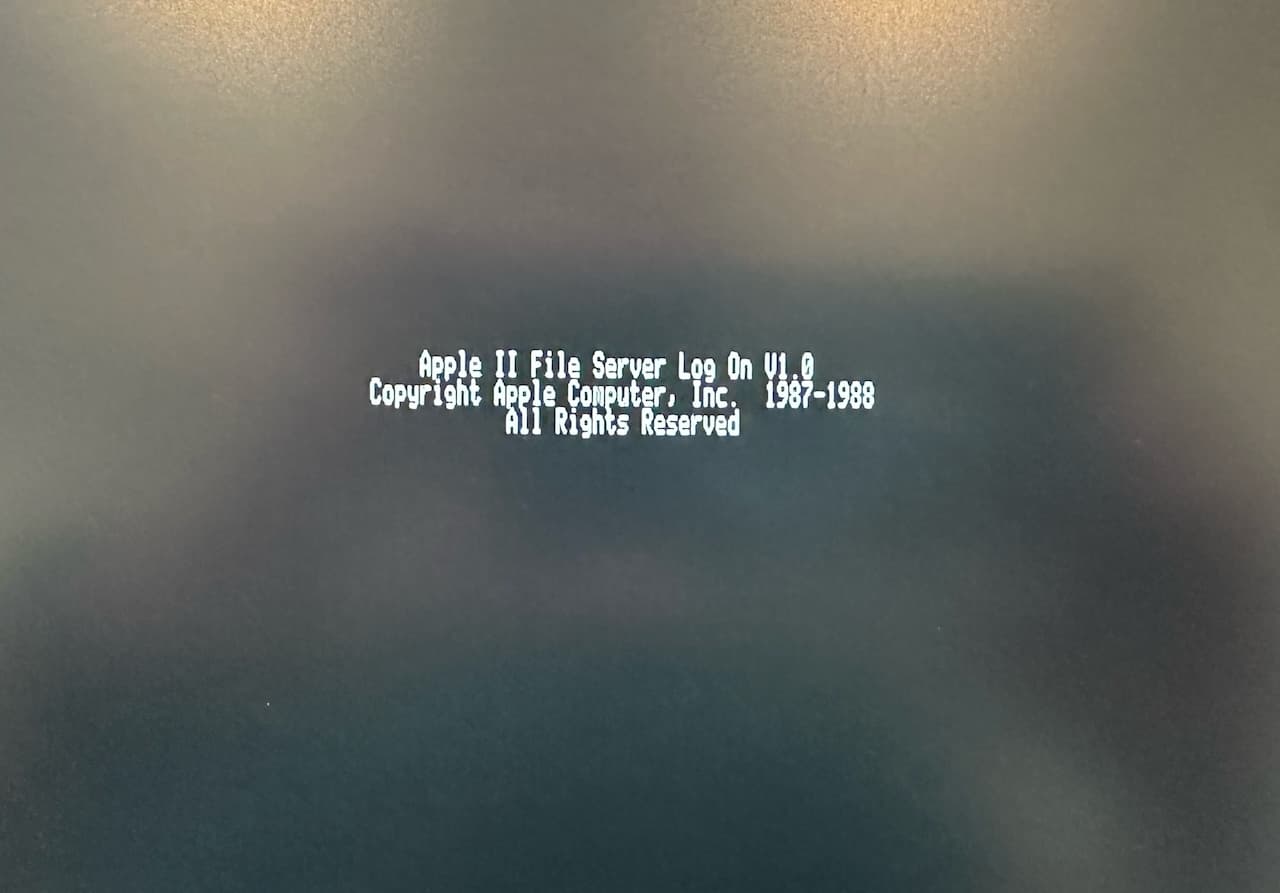 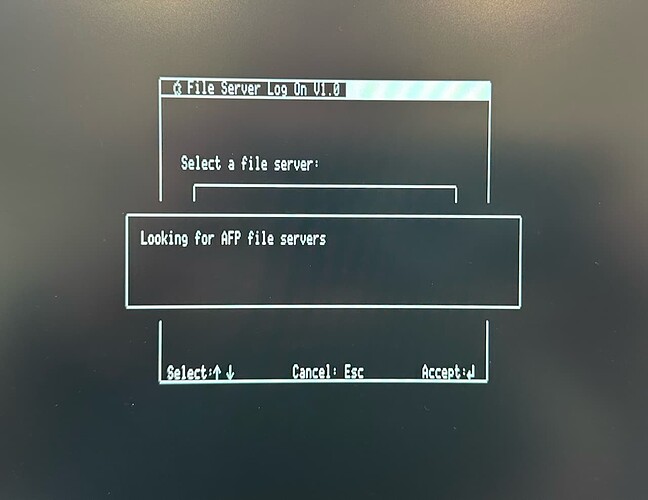 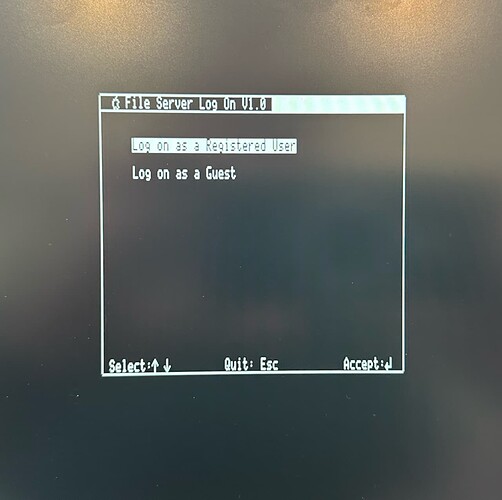 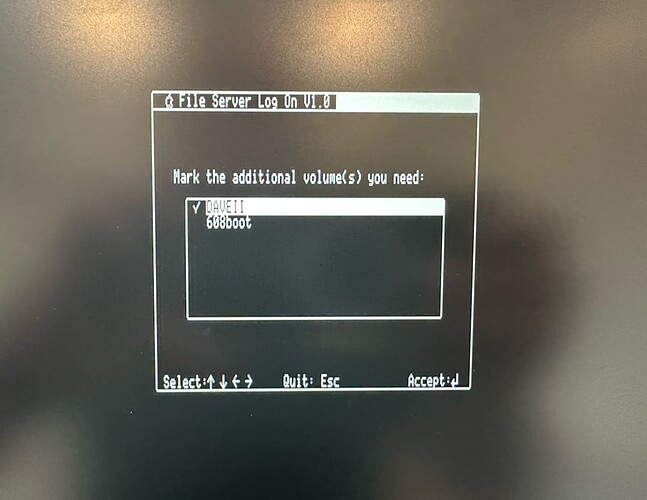 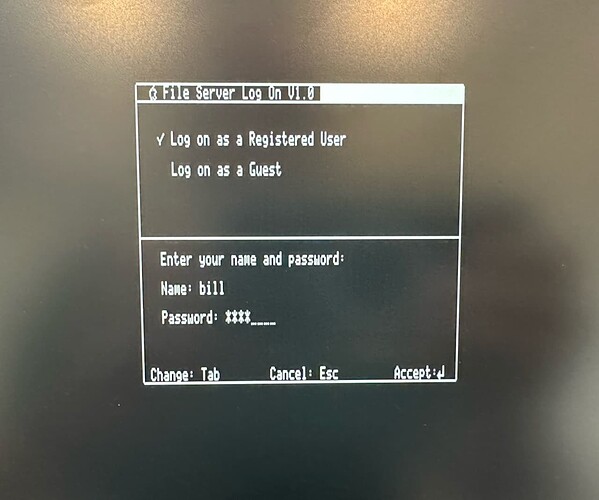 Once mounted the volume appears as a NETWORK volume with the Apple System Utility however, weirdly, it wasn’t assigned a “Slot” or “Drive”. I could copy files to the volume but could not launch applications I had copied to it with ProDOS failing with a PATH NOT FOUND error. After a few attempts to get this working without success I decided to just go straight to the next step and see if I could actually boot the IIe from the network volume. 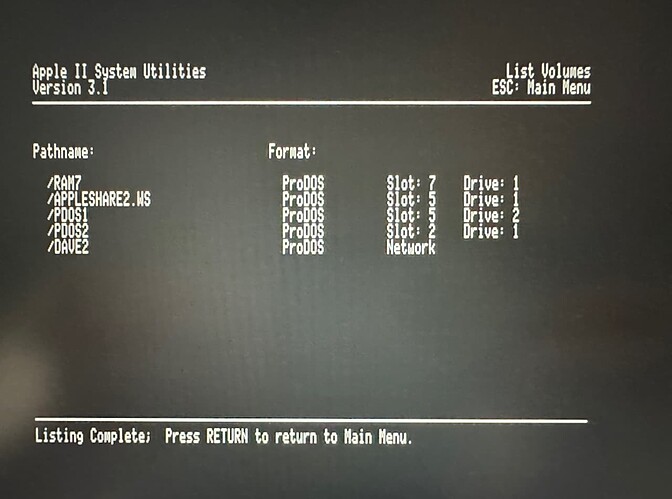 Very keen to see what you’re going to boot

RetroChallenge 2022/10 – Booting the IIe Card from the server

The final step in a month long conquest was to get the IIe Card to boot from the AppleShare server. In its standard configuration it turned out pretty simple. However it did take a while to work out on two fronts. The first I had to have the IIe Card configured properly. You might remember in my earlier posts I put the Apple II Workstation card in slot 1. As it turned out it had to be in slot 7 and the IIe Card Option Panel also needed to be set to boot from Slot 7. 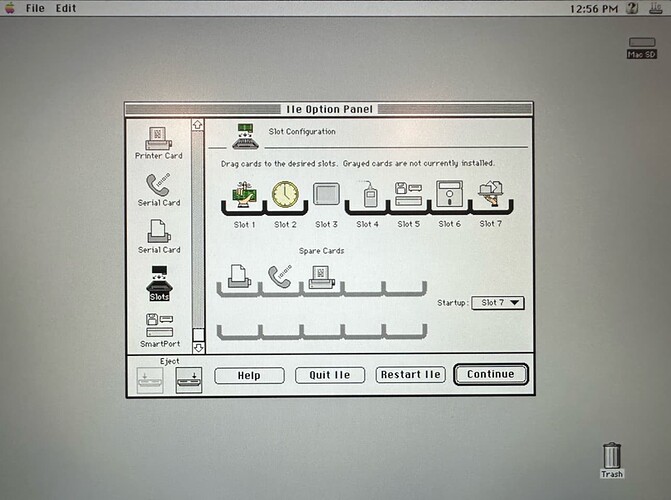 Once this was done all that was needed was to reboot the IIe Card and it would boot a copy of ProDOS directly from the server. The server volume was allocated to Slot 7, Drive 1 and most ProDOS software behaved as expected.There was one oddity however, ProDOS file utilities such as ShrinkIt, Copy II Plus and Cat Doctor all reported the server volume as 32MB (65535 blocks) but with 0 blocks free. All of these utilities still copied files to the volume with no problems, weird! Launching programs was pretty slow but I am sure things would be faster over ethernet but that is a project for another day and not really in scope for my current RetroChallenge. 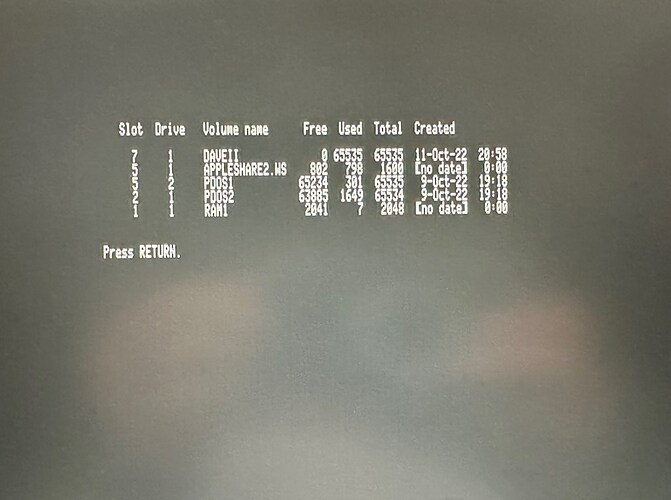 MISSION ACCOMPLISHED. I hope everyone enjoyed my ramblings.

MISSION ACCOMPLISHED. I hope everyone enjoyed my ramblings.

Fantastic - very much so!

So was the Workstation card a virtual device on the IIe card or was this on a physical Apple IIe?