I want to come up with a strict, unambiguous set of metrics to determine the world’s first implemented computer game. The history is messy, but I think my metrics will make things clear. There are lots of “one of the first” Wikipedia articles, but no definitive winner.

I will then use the metrics to determine the winner.

There’s a video or two linked over here which might be of interest: Stuart Brown (of the YouTube channel Ahoy) offers a well-researched exploration of the first video game according to various criteria. Of course, a video game is a slightly different animal from a computer game.

On that topic, is there a Flamewars™ game?

Here’s the details of the WOzFests I’m holding - feel free to join via Google Meet.

And I might even be able to have 10 attendees at WOzFest 22!

hi Riley,
I hope you can come up with some metrics for defining what a computer is. That’s going to have a huge impact on your results.
When I was in high school back in the late 70’s just before the introduction of microcomputers into schools here, a couple of us argued that our programmable calculator fitted the definition of a computer. I had a National 4525 Scientist PR and my mate had a much more expensive HP 25 or similar calculator.
These had keyboards, displays and could be programmed which to us fitted the definition of a computer.
I know computers go back further than that to mainframes or valve based computers, so I think you’re going to have to figure out your metrics first, then that should determine what computer was first and I’d bet that had a game program on it of some description.
I don’t envy your task.
cheers,
Mark C.

My lowest level definition of a computer is any machine that is “Turing Complete.”

If it was built (which it wasn’t), Babbage’s “Analytical Engine” would have been Turing Complete. This was the 1830s.

This is important as it is a precise definition that we can start with, then argue about further additions. E.g. Is a stored program required? Does that game have to be able to run in a reasonable amount of time (i.e. is it playable)?

Some calculators would be Turing Complete I reckon. We’d have to look into it.

The earliest Turing Complete computer is something like Konrad Zuse’s Z3 (1941), but as it lacked a condition branch instruction, it was (is) only theoretically Turing Complete. It’s this sort of boundary that is interesting. The answer lies, I’m pretty sure, somewhere between 1941 and 1951.

Did you come up with any metrics @Riley? You’d include single-player games, I’d suppose. And, presumably, you’ll include games which also exist in non-computer form, like chess.

In the UK, the phrase “using your skill and judgement” is (or was) used to distinguish a competition from a lottery. Maybe something like that is in your list?

There’s a great book on the Internet Archive 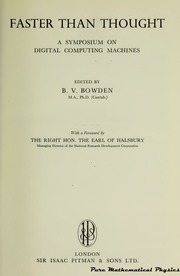 This is a PDF of Faster than thought in English language and script.Its is the summary of Symposium on Digital Computing Machines based on the material...

which surveys computing as of the early 1950s. I searched for “game” and got a few hits, which are unambiguously games, I think:

Great article @EdS - yes, I think the Nimrod Ferranti was a Mark I with some stuff bolted on, but am not certain. Bertie the Brain (1950) was also based on a semi built computer but I’m not sure how complete that was. Nimrod would be a good for the ACMS as John Makepeace Bennett was Australian and we can play up that angle. Maybe there’s something in an archive somewhere that predates 1950 but it has been impossible to find so far. Probably the most exciting lead is Konrad Zuse’s chess programs. Sure, Turing designed Turochamp, but Konrad may have actually run some chess algorithms on the Z4 before anyone else - Konrad Zuse - Chessprogramming wiki

Interesting idea about the Z4… I have a copy of Zuse’s book, and although we see that he was keen on the idea of programming for chess, it’s not clear to me that he ever wrote such a program or ran one on the Z4. (If he had, I expect he would have said so, as it would have been very impressive.)

Oh, I might move my vote to UTEC now… the Bertie person, Josef Kates (formerly Katz) helped design and build it and play games on it too, apparently:

Bertie the Brain was built to show off the potential of the little Additron tubes. “On the UTEC we were actually playing games, so I said, ‘Look, we can build a game playing machine’…. Practically everybody knows tic-tac-toe. I thought it would make a nice exhibit.”

See also here:
“It will be able to compute income taxes; to tell the trend of business at an electrified glance; to play a passable game of chess, and maybe even to forecast weather months in advance. Any of these operations will be done in less than a second.”

But we don’t know what games were played on UTEC, or whether chess ever was.

Yes - you’d think there would be some documentation re Zuse and chess. I’ll look into it more.

Charles Babbage wrote about it in 1864 after losing to the “Mechanical Turk” haha.

UTEC, yes, we just have to determine if UTEC could run Turing complete algos at the time of Bertie the Brain. Again, I’ll look more also.

I bought the book cited on the chesswiki page for Zuse… it looks like he published about programming chess-related algorithms in 1959. Here’s that book on Google Books.

I note the Z4 had only 64 words of data memory - that’s very scant indeed for a chess program… having said that, Peter Jennings’ Microchess uses only 45 zero-page variables on the 6502, so perhaps 64 words is adequate! (But I see now that it maintains two stacks in page 1, so there’s more memory usage than those 45 variables.)